ADALend is a proposed decentralized lending protocol on the Cardano blockchain that has been held in skepticism by many community members for a while. We have them listed on our site and have listed the red flags that are associated with the project. We were happy to give them the benefit of the doubt here but a community member raised some concerns regarding their ethics in their token sale and forwarded us some emails that were of interest.

With concern, and in the spirit of investigation, we decided to take a deeper dive into ADALend. Let’s see what we found.

The content of the emails we received had a focus on these early investors being in profit at the time that the project came to being listed on multiple launchpads for their IDO. There was also questionable language in there that seemed to point toward some level of market manipulation by ADALend and, potentially, the launchpads themselves. 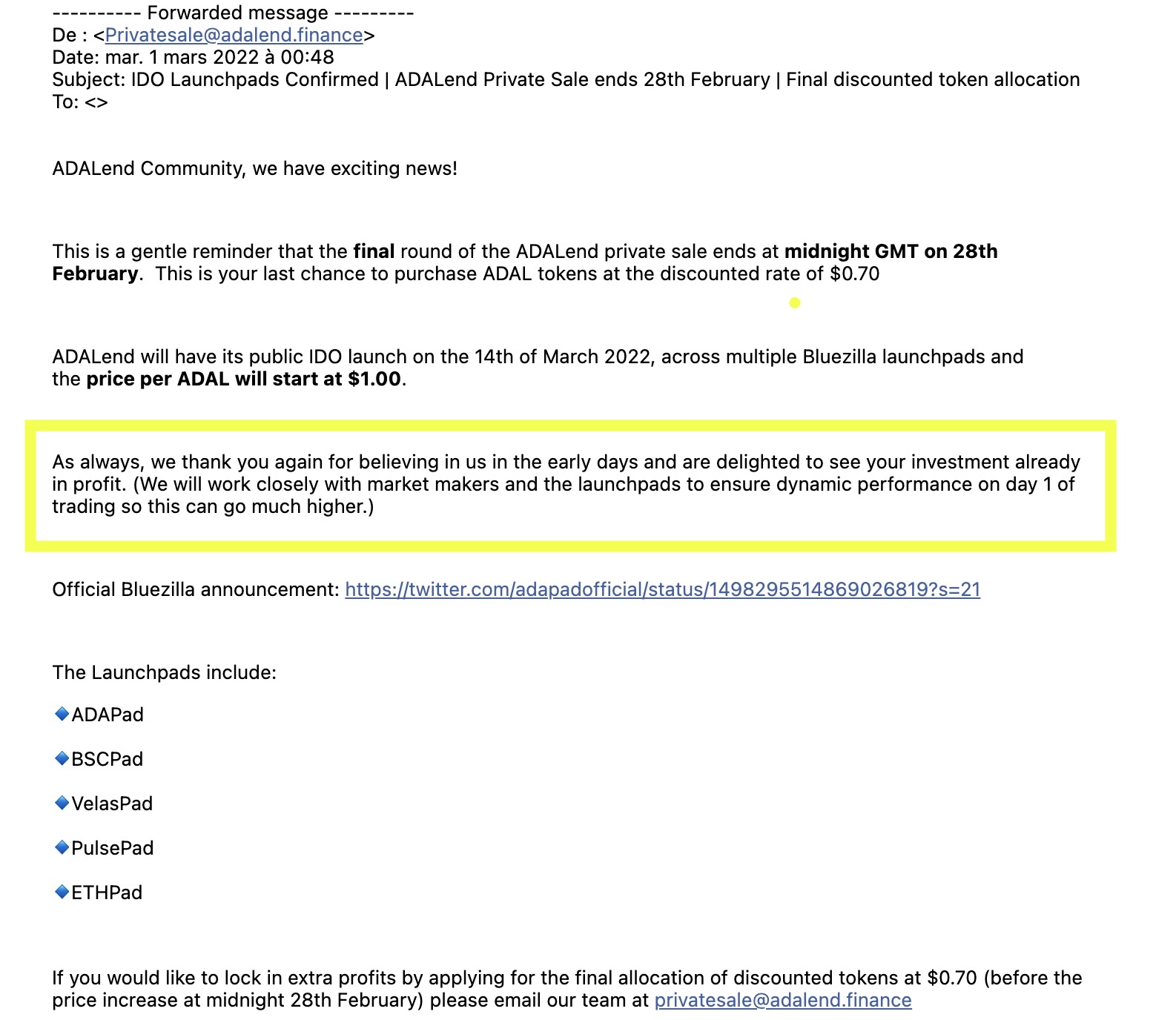 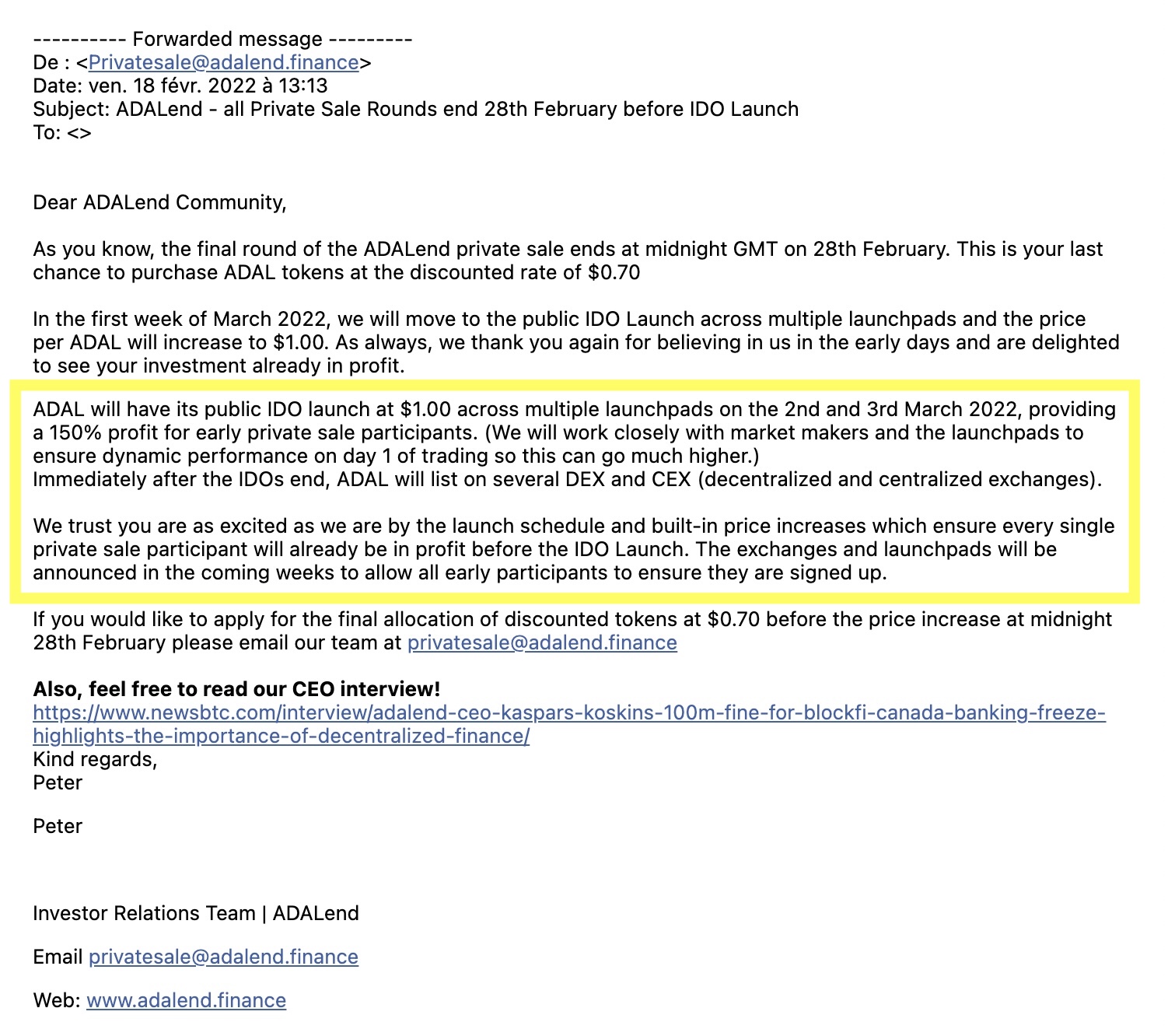 As promised the price spiked and then promptly jumped off a cliff. Followed quickly by its lover, trading volume, and neither has seen much action since. Oh, and now two months later the mentioned CEX listings are yet to materialize.

The first part of their website lists their partners, all of whom’s legitimacy, except one questionable actor, can be disputed. Let’s break them down:

JPMAXX - Sounds like an investment firm. Cannot be found or confirmed to be a real investment company. (JPMAX, note the single X, was JPMorgan’s small cap value fund, now liquidated).

IOHK - IOHK are not partnered with ADALend. They are partnered with almost no one in the Cardano ecosystem, probably to ensure that they can be unbiased and not be accused of bias.

Moonwhale Ventures - Wrongly linked to the IOHK website this investment fund has been brought into question and described as always being part of “cash grabs”. In the blog post announcing this “significant private sale investment and strategic partnership” they do not link out to Moonwhale at all. If Moonwhale are legitimate they also haven’t listed the ADAL token in the Moonwhale Ventures portfolio on CoinMarketCap.

BlueZilla - A legitimate partnership, proved by BlueZilla who told us they facilitated ADALend’s IDO. However, this VC company’s legitimacy has been scrutinized before along with their multiple launchpads, which ADALend used to launch their public token sale (also where they seemed to promise price manipulation).

Altamira Crypto Capital - Hard to find any information on and no links to ADALend exist.

Swapz - A BlueZilla token swapping platform and a platform on which their token is listed. Shouldn’t be classes as a partnership and should be listed with the DEXs listed on another part of the ADALend website.

Blockspot.io - Blockspot.io are an educational platform and database of blockchain projects and it doesn’t seem that they partner with anyone.

ADALend consistently touts their listing on the IOHK Essential Cardano list in all their materials. It is a permanent fixture on their website, was put out as an article, and in emails to those who signed up to their private sale emails. 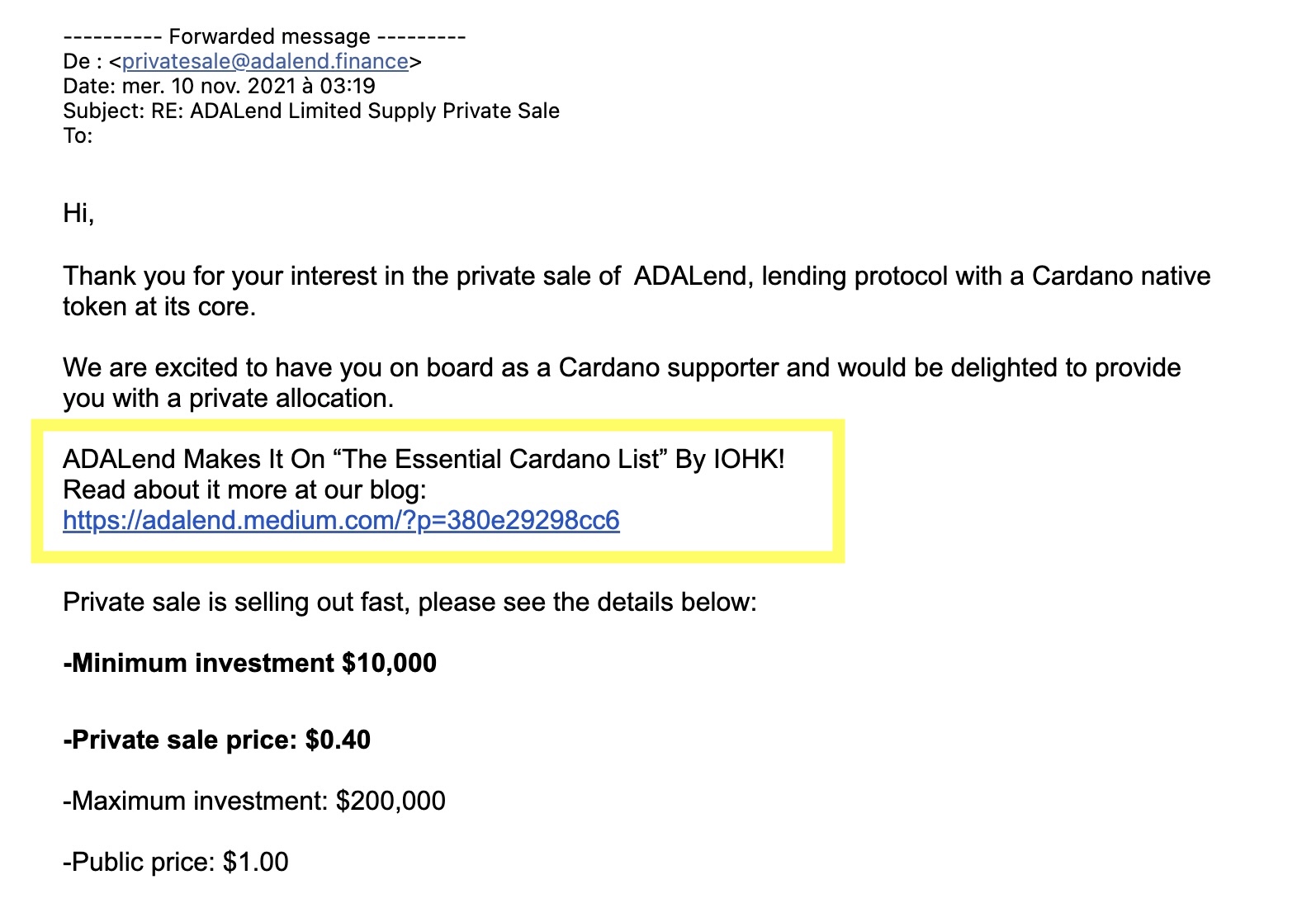 The IOHK Essential Cardano list is an open sourced and unregulated list of projects building on Cardano that anyone can contribute to. Touting something, and trying to make it meaningful by calling it a “milestone achievement”, that puts them in the same sentence as the company developing the Cardano protocol gives the distinct impression that someone is trying hard to create and promote their own legitimacy.

This is the number 1 red flag for any project! Always be wary of ideas (and marketing) asking for your money with nothing to show that they can, or are trying, in fact produce anything.

To complement this there have been no development updates. Talking of development…

The ADALend protocol is being developed by robatznetwork signed on in early February. These folks, a swarm robotics startup, seem to have little to no blockchain experience listed on their website, or even previous experience to talk about in any area of development. There is little to nothing available about this company and more will emerge about their applicable skill sets in a moment.

The Team A.K.A The “Blockchain Development Group”

Working out the legitimacy of The ADALend team is not as straightforward as it has been with other suspected scams and lines are blurred between fake profiles and those that may actually exist.

The CEO - The same image of Mr Kasper Koshkins is, rather poorly, repeated across all marketing materials and it is hard to discern the legitimacy of his Linkedin profile. What we did find in our research was a Facebook profile of a Kasper Koshkins who seems to be the same person. However, there are two things to note about this Facebook profile:

Koshkins the CEO has done multiple “interviews”, but the platform they happened on is never listed, and all of these have been given to us as text on their blog. We’ve never seen, or heard, him in an interview.

The CTO - Ali Krynitsky is listed as the CTO on the ADALend website but after being able to get in contact with him by contacting RobatzNetwork on Facebook (of whom he is the founder and CEO) he told us that he is actually a “CTO on demand” and that "Officially I’m not a representative of stakeholders interests”, declining to give us any updates on the progress of the project. His Linkedin is very sparse, yet has almost 400 connections, and he has no blockchain experience mentioned anywhere. His profile and company offer no proof of any development experience whatsoever.

What he did tell us was that they have some Solana projects in the pipeline and that “Adalend was our first commercial project on Cardano”. He then didn’t answer questions regarding the qualifications of his team members for developing on Cardano (whom we’ll get to in a moment).

Other Members of the Team - The Community Manager’s Linkedin is thin on the ground and it’s hard to find anything else about him online (although this doesn’t surmount to conclusive evidence in any direction). Their Senior Advisor seems to be a legitimate and well experienced individual who links himself with the project. This article announces Mr Khattak as a member of the team; not as a senior advisor but as the General Manager who curates ADALend’s business progress. It also says the technology progress is guided by "top-tier fintech developers Philippe Dee and Sarawut Sanit" yet they do not seem to exist in connection with ADALend.

The above team section of the site is actually titled the “Blockchain Development Group”, none of whom are said to have a lick of blockchain development experience. This group of people, purported actual developers, are said to be developing the protocol.

There are 7 of these guys in total. All of whom, according to their Linkedin profiles (where the level of content, and thus their verifiability, varies greatly), work for both RobatzNetwork and ADALend. Now this could be seen by skeptics as an attempt to legitimize a project by listing more individuals, and this is certainly how we see it. RobatzNetwork have been contracted to develop ADALend, so these people are not necessarily members of the ADALend team, especially when the founder of Robatznetwork himself said that he was a "CTO on demand" and not an actual member of the team. So they don’t work for ADALend, they work for RobatzNetwork whose client is ADALend.

Furthermore, along the same vein as the “Blockchain Development Group”, none of these guys have any blockchain, let alone Plutus, experience listed in their skill set.

The media section of the site lists five different media sources but links to none of them. In summary, almost all of their postings here are either sponsored posts or press releases (which are then often paid to be pushed to news platforms so two classifications for the same thing, paid listings that are indiscriminate of the legitimacy of the project paying for them).

Cointelegraph - The article quoted on the ADALend site doesn’t exist.

Investing.com - All articles about ADALend on Investing.com have been posted there by CoinQuora (where they’re paid for).

cryptonews- All articles are either sponsored or press releases.

CoinQuora - Almost all of the articles about ADALend on CoinQuora are, again, paid for.

The ADALend whitepaper is quite comprehensive on how the platform will work but lacks coherence (this comment already takes into account the fact that it may have been written in another language and then translated into english). Here we’re going to highlight a few points that we picked out through an initial read of the whitepaper.

With all that said their private sale is complete, their IDOs are over, and it may be too late to stop these potentially malicious actors running away with people’s funds. There is still hope that they produce something, with Beta release scheduled for Q1-Q2 2022, however the evidence collected here points to an exit scam that only needs to shut the door behind them on their way out.

That being said, we do hope that the people who read this can learn something from it (if you find it valuable please share it with your friends!) and we want to start a conversation with more people about how we can build a sensor array for these sort of projects to prevent more honest people from having their pockets picked.

We value any and all feedback from all corners of the community and invite you to reach out to us, @Cardanobuilt, on Twitter if you have anything you want to contribute to this conversation.

As always, stay safe out there Cardano 🦆